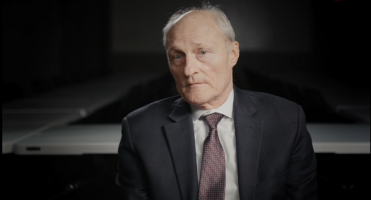 Thinking Out Loud with Tony Miller

When I was 12 years old, I had a secret. I sat all the way in the back of the classroom, and no one knew it. And I had a teacher named Mrs. Robinson, and she was a gray-haired woman. She’d walk up and down the aisles. And finally one day she stood right behind me, about the second week. And she said, “Oh my God. “You can’t read.” Now, I wanted to crawl under the table. I wanted to jump out the window. But here it was, it was out. Now Mrs. Robinson wasn’t just gonna pass me along. She called Mrs. Lumley. Now Mrs. Lumley was a teacher who was gifted in teaching kids how to read. So my very first day going over there, I rode my bike over there, Red Racer. And I rode my bike over there, and got to her driveway and looked down it. And it looked like the longest driveway I’d ever seen in my life. And I couldn’t decide whether to ride down that driveway, or just ride away. But I rode down the driveway, and there was Mrs. Lumley, and she had a plate full of Oreo cookies. Well, she had me right then and there. I said, “Mrs. Lumley, am I ever gonna learn how to read?” And she looked at my bike, and she looked at me, and she said, “You know, I’ve never known anybody who could ride a bike “who couldn’t learn how to read.” Well, I went inside and got busy on learning how to read. And I went there regularly. Before I knew it I was a pretty good reader. And Mrs. Lumley didn’t say that I was too dumb, or too lazy, or too stupid to learn how to read. She was only an encourager. And I found out later that she had helped hundreds of kids just like me who were terrible readers. And she encouraged us. And today I can read. And when I look at every person who comes in the front door, whether they can read or not read, or what country they’re from, I can connect with them. If they can’t read, if they don’t know the language. I want to be the company that helps them. That Mrs. Lumley is at the front door, I think, every day greeting people and meeting them, and telling them to come on in. It doesn’t matter where you are, or how you started, or what’s holding you back. Just come on in the front door, and we’ll work with you. And I believe that’s what the gift of JANCOA gives. Is an open, welcome way of, hey, here’s an opportunity. What do you need help in? Let’s sit down together and figure out what that means. I think the toughest thing is to really understand what they want. And I think that takes skill. I think it’s a skill set. And I think for me I had a great teacher, and that was Mrs. Lumley. She just was a master at it. And I thought that I was going there to learn how to read and what I really went there was to learn how to be a human being with other human beings. That’s what I learned from her. And I did learn how to read, so. That was a secondary thing. So thanks, Mrs. Lumley.

Dig deeper. Watch “You have a People Problem” on Youtube.